We remember him as pesky little brother Miles Mitchell on the hit 90’s television sitcom, “Moesha” which brought him 3 nominations for a Hollywood Reporter Young Star Award, and a Young Artist award from the Academy for Professional Entertainers, and 3 nominations from the NAACP. Marcus T. Paulk is back on the screen and is currently gearing up for the January 2012 release of new George Lucas film, Red Tails. This film, based off the Tuskegee pilot training program during World World II, also stars Terrence Howard and Cuba Gooding, Jr. I got a chance to catch up with this veteran actor as he gave much information about his filming experience, his music, and other future projects! 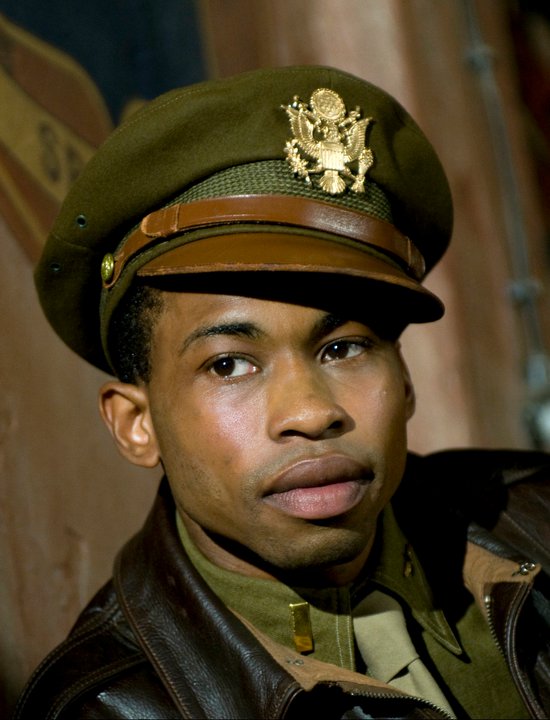 Charli > So as a start-up to get a little background information, we know you played Miles of course on “Moesha” years ago, but before that what was it that jump started your career? What attracted you to acting?

Marcus > Well I started out when I was about four years old. I used to dance on Venice Beach imitating and emulating Michael Jackson and MC Hammer doing dancing and stuff out there on the beach. I was a fan favorite, people and tourists and a lot of people used to go down there in the nineties so it would be tons of people out there. It was really cool; I used to love doing that. I’ve always loved entertaining people and that’s pretty much kind of how I started. There was a casting lady who actually saw me out on the beach and told my mom you know you should get him into acting and with a dance agency. My mom didn’t know anything about the business, she talked with the lady and the lady gave her the agency information. The agency loved it, they called me in and after they met with me, they signed me for dance. After that, they signed me theatrically and commercially and it was history after that. One of the first big things I ended up booking which was wild because I used to love MC Hammer was the MC Hammer cartoon Hammer Man. It was really cool.

Charli > So now you’re gearing up for the release of Red Tails! So talk about…I did a little background research on it, so talk about your character, Deke Watkins.

Marcus > He’s the spiritual leader of the team, the guy is real…we all have different characteristics of the character and mine is the spiritual and religious one. I carry around my black Jesus picture and I keep things right in the air and keep us safe up there.

Charli > I realized the film is centered around the Tuskegee Airmen, so was it hard for you to film a movie set in that era? Like in order to recreate the history?

Marcus > It wasn’t hard, it was definitely a process and we definitely had to sink into it. We isolated ourselves, we went all the way to Europe to shoot the film. We were in the Czech Republic…Prague, Czech Republic; we stayed there for three and a half months. When we first got there, right off the plane, the next day we went straight into boot camp, military training…. we shut ourselves into their whole military time and no electronics for about a week and a half…we only had our cell phones for about ten minutes a day. We really lived in that era, we played the music and stopped using slang and we really tried to set ourselves in that mode. We actually got to meet some of the Tuskegee Airmen and talk to them about 1940 and that era and them actually being in the war which helped us get a better grasp on really recreating and being them. It was definitely an experience, definitely like a deep thing. Taking that time and going back to 1944, you know it’s a different era because there is so much going on and so much change happening in America and showing them in their best light is what we wanted to do. We grasped all the information we could. We got to sit and talk to them, we researched the era and learned how they talked and once you add the clothes and everything else on top of it, it all kind of came together. And the haircuts, and everything and we really brought it to life.

Charli > That was gonna be my next question. What type of training did you have to go through to endure, for that role?

Marcus > We did military training, we did flight simulated training. We actually went up and got to fly in the historical v51 fighter plane, out in Chino, out here before we actually went to Europe. That was amazing, getting to see what it really felt like to be up in the v51 and we were doing barrel rolls and loopty loops and that was an amazing feeling. That was some of the things…we worked amongst each other, definitely working on the script and getting everything really tight. We worked with each other making sure that you know with the flight simulation and the look of how it is to be in the plane, we had a flight manual that was thicker than the script for learning parts of the plane. So we were really saturated into it and we took it very seriously.

Charli > What was your experience like working with the other cast members and being behind the scenes with everyone?

Marcus > It was like a brotherhood, we all got together and working together and training together – team camaraderie came right from that. After that, everything was just a flow. Working with all the guys – working with Terrence Howard and Cuba Gooding, you can’t ask for anything better than that. Everybody knows Terrence is the man and the other guys my age, we’re all really good at what we do. Nate Parker, Neyo, Michael B. Jordan, Elijah Kelly, Leslie Odom, all of those guys, Tristan Wilds, we’re all really good at what we do already and everybody kind of added to each other, you know what I mean? We added to each other and it made everybody better and it comes across really good on screen as far as the brother-ship we had and the love for each other and respect for the actual project. I have to say Anthony Hemingway was the director of the film and did a great job picking the cast and he knew exactly what he wanted and I think nobody could have done a better job than what he did with the vision of who he thought was perfect for the role.

Charli > Awesome. It definitely sounds like a must see! So what can you say to fans to draw them into really wanting to get out and see it on the release date?

Marcus > Well this is an epic film, if you guys don’t know who George Lucas is – Star Wars, Indiana Jones, he doesn’t miss. He put a lot of time and effort into this film, he’s been wanting to do it for twenty years and now it’s his baby. It’s coming to flourish and you’re really going to get to see that.  We’ll take you on a rollercoaster and the movie holds you and you’re going to be excited. I think everybody is going to love it, it’s for all the generations because you know it’s 1944 and you’ve got this new edge young cast playing these roles and it just kind of brings everything together and I think it’s a huge family friend actually and everybody is going to want to see it.

Charli > So outside of Red Tails, are there any new projects that you’re working on or preparing for?

Marcus > Yeah actually there’s a couple shows right now that I’m up for and a couple projects I plan on producing coming up, they’re in the works and I’m also doing my music right now so I’ll be releasing a song at the beginning of the year at some point, first quarter and that’s going very well for me. I’ve been doing my music for a while. I sold my first song on Another Cinderella Story with Selena Gomez. I was in that film and I sold my first song for that soundtrack called “First Class Girl”. I’ve always loved music starting out as a dancer so I’ve always been around music. My dad used to sing and you know, working with Brandy,  I loved it and I just love music and people really love it so I’m ready to take it to the next level and into the world and I can’t wait to see how they respond.

Charli > I was actually going to ask you about your music. I don’t know if you’ve covered everything you wanted to say but that was going to be my next question, to describe your music career and where you’re actually going with it.

Marcus > Yeah, I see know that triple threats are a big deal. You know we’ve got people like Jamie Foxx, Will Smith, Drake…everybody you know was successful doing that crossover and it becomes a really good, big thing and that’s something that I’m in to. I’ve always loved music, so for me it’s just something that comes naturally and my music is very fun and party like my lifestyle. I would say, me being from LA, I kind of give a view of the party scene and the fun stuff and most people from LA are hardcore rappers and me, I’m more about party and fun, a good time, the ladies, you know. So my music is all about that.

Charli > Cool. So how can fans connect with you through social networks and websites?

Charli  > Well I wanna thank you so much for the chat! Is there anything else you’d like to share with us?

Marcus > I mean anything other than that, people can hit me up on Twitter is they wanna book me for shows and events to get at me.

Charli > Ok cool, well I thank you and I’ll tweet you when I have this up. Thank you Marcus.