I think, by far my best interview. This 20 minute, face-to-face chat with one of Hollywood’s most handsome men — really made me appreciate my growth of “dreaming” on another level. He kept it real, told me truths, and most importantly discussed his personal struggles & challenges that I could definitely relate to. Omari Hardwick, one of the familiar faces of Ava DeVernay’s latest film, “Middle of Nowhere”, Tyler Perry‘s “For Colored Girls”, and Salim Akil’s “Sparkle”; tehehe, you know him, don’t you?

(UPDATE: Omari currently stars as GHOST on POWER only on Starz) Enjoy!

Charli >> Hi Omari! I’m so excited to be talking to you. I just finished screening your film, “Middle of Nowhere”… amazing, absolutely an amazing film. So I work with Jami, and I’m also an MFA student at Howard and just wanted to chat for a bit.

Charli >> This semester, I’ve really been focusing on analyzing character and character development.

Charli >> But before we get into that, I do want to ask you first, how did you get into acting?

Omari >> Well I thought about it young. I was really young. Then my mom said there were some classes around the corner. But my mind was on Hollywood.

Charli >> And where are you from?

Omari >> I’m from Atlanta… So she said that, and I’m thinking more Hollywood. So that was all of a sudden x’d out. Then I got into soccer. Soon followed basketball and baseball and football. I was a heavy athlete for many years. I did a couple of plays when I was in high school just to see if I really did like it. I enjoyed it and I wrote. I was a poet. So I was sort of living the story that I was writing about. It wasn’t until the University of Georgia; I minored in theater. I played at the University of Georgia as a football player — so as a 205 lb theater minor who ultimately joined black theatrical ensemble [laughter] of Athens, Georgia; and ended up doing everything from August Wilson‘s “Fences” to pieces of “The Westside Story”; and then learned the basics of Shakespeare… all of that, I liked it. I got into it and it always felt kind of natural to me. It was also natural to tell a story from the actor’s point of view. So I went out for the NFL and got cut. But at that point, after minoring in theatre, I was like, “I think I really want to do this.” But I thought — the way to do it was to play 5-7 years in the league, then parlaying into doing what you’re doing; working for the headlines; going back to Atlanta, working for ESPN, and THEN get into acting. Of course God laughs when you make a plan, like you’re laughing at me now [laughter]. I went to this AIDS walk in Atlanta with my moms, and Leon was there, the actor from “The Five Heartbeats”. And when I saw him I was like wow because I using the walk to break the news to mom that I really wanted to move to New York or LA to pursue acting.

Charli >> And what age are you at this point?

Charli >> Interesting! All of this is hitting home for me. I’m from Mississippi. I come from the south as well.

Charli >> Right! So I come up here, wanting to explore this artistic life and was 22 at the time.

Omari >> You were 22 and so I was in an interview earlier with an undergraduate student and I said, the other thing that I had on my side was age. A motivating factor. So it wasn’t like oh you’re young you can do it now; it was more so like, there’s a level of bravery when you’re younger.

Omari >> There’s brave people, there’s not brave people. There’s good people, there’s bad people. There’s assholes, there’s nice people. So I think that I was just that lionhearted, very ambitious kid out of the 4 of my parent’s kids. I just used the age of being young and was like, “what do I have to lose”? So I was 200 lbs and my first movie was a Spike Lee movie. “Sucker Free City” with Anthony Mackie and Malieek Straughter. Now I’m 5 years in the struggle. I’m in Cali, so I’m 29 years old. Great actors. We were all up and coming at the same time. At that point, life kind of started for me as an actor. So I was 5 or 6 years in if that gives you any inspiration.

Charli >> It does! So as far as your struggle or your challenges in getting to this point. What do you think was your biggest?

Omari >> I was in a relationship. I ended my college relationship or whatever. So then I got into my first major relationship in Cali. She was a school teacher. She was very attractive to the dream; and attracted to my talent and the art. But she wasn’t into the roller coaster that it came with. The ups and downs and what ifs — she had a lot of fear. People have their own personal issues. She was brought up in fear of loss of money. She needed stability. I’m a capricorn, mountain climbing dreamer and she’s a cancer — who totally needs security.

Charli >> You believe in that stuff huh!

Omari >> [laughter] I don’t believe in it but you know… come on! She needed security.

Omari >> So she wanted me to have a backup plan if it didn’t work out by a particular age. I became a firefighter. So to make a long story short, we ended up breaking up. And I realized that she wasn’t really somebody — if she couldn’t support me in that; and no knock, I just learned what she needed was very different. So I stayed being a firefighter, then one day I realized that it wasn’t my passion, I said “no” and left. 3 hours later, “Sucker Free City” called me for the job. 3 hours later.

Omari >> A whole 3 hours. I think I said “no” to the fire department around 9:10AM. I remember vividly. And about 12 o’clock I got the call. So if I didn’t believe in God at that point [laughter] you know what I mean? [laughter] That was the turning point for sure.

Omari >> That was the challenge [laughter] And if you’ve been in a relationship before you know — a lot of times it’s stuff carried over from former relationships. So when the college one ended, I carried guilt and was trying to make the other one work. So it was like, I’d do whatever she wanted. Then I was like no! You have to do what you’re supposed to do on this earth. What God has destined you to do is what’s priority. I figured it out, yeah. [laughter]

Charli >> Omari Hardwick said it best! [laughter] And now… “Middle of Nowhere”, your character… I don’t know if you auditioned, because I know for some actors, certain roles are written specifically for them, but what was it that interested you in that character?

Omari >> You’re right. I do both, but I didn’t have to audition for this role. I’ve done 2 with Ava DuVernay. My first one was “I Will Follow”. With Sallie Richardson and Blair Underwood. Ava’s claim is that she knew at that point that I was someone she wanted to work with. I have a bunch of different levels and layers and she has since then found out how many layers. It’s ironic because she wrote this story, “Middle of Nowhere” prior to “I Will Follow”.

Omari >> She did “I Will Follow” to get this done. So when she wrote it, she had Idris Elba, who’s a good friend of mine and very gifted. She had Idris slated to do this with Sanaa Lathan if I’m not mistaken. So that was before she met me and saw me on “Dark Blue” and gave me a shot on “I Will Follow”. She just called and asked me to come play again. So I never had to audition for Ava. It’s very flattering to be told, “don’t worry about it, we know you…”. But I’ve had my share of auditions. I’m still auditioning.

Charli >> Nice! And can you pin point on “For Colored Girls” and “Sparkle”?

Charli >> In “For Colored Girls” did you specifically audition for the role that you played, Janet Jackson’s hubby?

Charli >> I mean, who didn’t hate his character??

Charli >> I did. I love Michael Ealy and I know it’s acting, but geesh that character was awful! 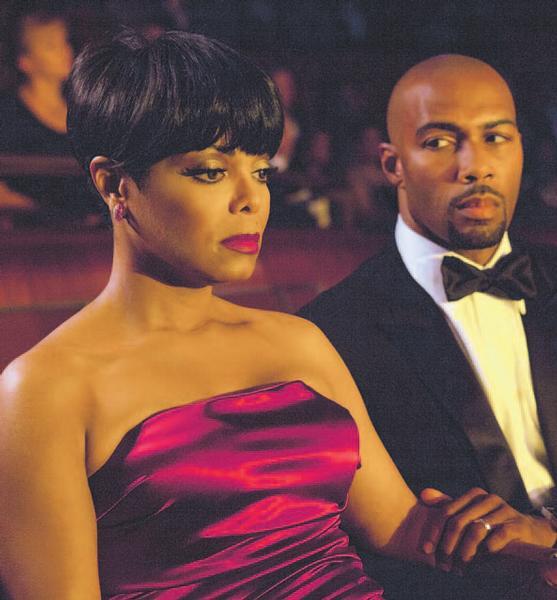 Charli >> In consideration of the role and creating the story, I would have to say yes.

Omari >> There you go! Shout out to Mike. He’s from Baltimore. I don’t know if he auditioned for my role, but I auditioned for both roles. And you know what Tyler decided? He decided that probably in my physicality, and in the aesthetic that you see Omari as when he walks in a room, he probably thought: let’s go opposite of what he looks like. Let’s go in on what people would think, “wow, he’s playing that?”

Omari >> Because that’s really sometimes what that character looks like. It’s confusing. You know what I mean?

Omari >> So he gave me that opportunity and I thought it was awesome.

Charli >> You did a really good job playing the role that you did. But when you said that you had auditioned for the abusive father and husband, I was like… ahhh, no!

Omari >> I didn’t really want to play that though. I never wanted that.

Charli >> But did you think you could really get into that character?

Omari >> Yeah, but I wanted to play my character. Always, always.

Omari >> What’s ironic is that I lost a son prior to “For Colored Girls” so that would have been very hard for me to digest.

Charli >> Yeah, a lot of people really took that part hard. Which is why I wanted to clear that up.

Omari >> Yeah Tyler did what he could with that. It’s such a tough role to drop kids out of a window like that.

Charli >> Yeah, I stopped the movie at that point. But I commend Michael Ealy.

Omari >> Yeah, that and Khalil’s role, raping Kerry Washington’s character. Those are very difficult roles that men portrayed in that movie. So moving on.

Omari >> Excellent questions. Thanks for having me.