Once upon a time….

If you were to ask me about my love life. I’d laugh. Right there, in front of your face. Like that uncontrollable — or quite often, that ugly, hilarious laugh. I’d laugh and most likely, by the end of that laughter (if it were to ever cease), you’d know why.  Then again, I may just smirk, and keep it moving. In fact, just take a moment and think about the title alone. So, if you REALLY know me, then in WHAT world would I give ANY of my past lovers a second chance to prove they are worthy enough to be in second relationship with me? Granted, everyone makes mistakes… and in no way am I saying that I, myself am completely flawless. But, what world?

Moving on and not looking back has always been my thing for as long as I’ve been old enough to “date”. Once the relationship has come to its final departure, I move on. I’m out — done, zip, it’s over. There’s no going back + forth via text and phone arguments. No blowing up his phone begging and pleading that things will be better. I don’t even have the energy, nor the desire to ask questions in almost ALL cases. Needless to say *in Plies voice*, “Ain’t no looking back, bih.”

But when it comes down to love, is there ever an exception to this rule? Or in this case, my rule; and ironically, this world…? 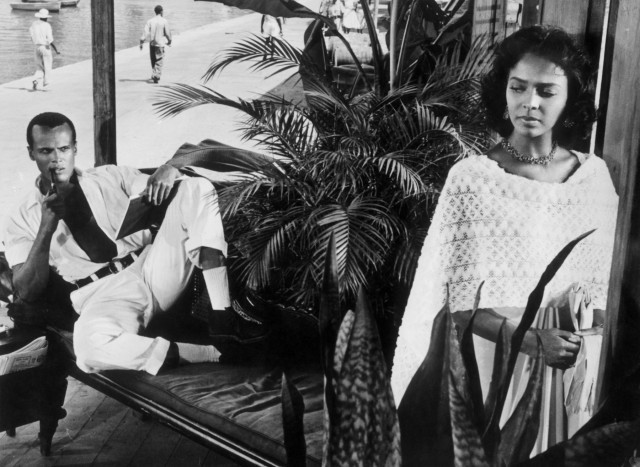 I’ve written about my dating trials + errors a time or two before (on my professional blog); but never really got into the deets of those experiences — mainly because I’ve just always been low-key about my personal affairs + romances. Quite honestly, I’m currently typing away on my Macbook, while #SnowDay binging on “The Wire” — really unsure on what I’m about to say. But let’s start with: This Dating Life Is A Trip.

Call me crazy, but who would have thought I’d end back up with a past lover? Certainly not me and certainly not after discovering specific facts about this said past relationship between he and I. In fact, I was so sure that we were over and our life together was done with, I had erased all the fond memories of him… (or at least I’d thought). Months later, I even moved on to someone else — someone who I’d kept in the friend zone for MONTHS — ONLY to get avoidably hurt 3x’s worse.

As I type, I continue to remind myself that I’ve never really talked to anyone but my mom, dad and older sister about why I chose to get back with my ex. They all gave me legitimate insight, advice and reasons to allow the pros to out-way the cons in this particular situation. To tell you the truth, I owe no one else a response or explanation — however, I’m a writer. I write for a reason. I write to allow my thoughts to unfold through creative words; not only to help me feel better, but to help others. Kind of like journaling for the public eye. In this case — do you ever wonder when love IS worth a second chance?

I’m the type of woman that has learned her worth. May sound cliché, but all truth. I embody it, teach it and exemplify it. [Read my story here. Published January, 2014]

After relocating and finding new life on the East Coast, and while in school  to receive my Masters degree [from one of America’s most prestigious universities], I was enjoying life and its fresh bliss each day. Being blessed to live this type of lifestyle, is something major for a young woman born and raised in a small city in Central Mississippi, such as myself. I took nothing for granted. I was enjoying life: trying + cooking new foods, falling in love with the Bohemia lifestyle + hiking, taking up all sorts of art, and even hanging out with people who come from all sorts of cultural backgrounds — From Sidney, Australia, to Cape Town, South Africa… to Redondo Beach, CA. During this time, I’m making the best out of everything that I have going on. Although my friends from back home were (and still are) getting married and having babies, I wasn’t interested in seriously dating any guy, let alone, settling down with hopes of starting a family [eek!].

Little did I know, during these few years of self-discovery, I’d also run into someone who would one day become my best friend.

This wasn’t an ordinary friendship. And during the initial 2-3 years of hanging out super tough, we both knew that. When we first met, we hit it off instantly. Going through that phase of when you meet a fun, new person… and you’re getting to know each other… you know, that part is always… (allow me to overuse the urban term)… LIT.  After a couple of weeks of learning bits + bits about each other, we were hanging out for drinks. When I say he made me laugh like no other, he did. We were like BFF’s.  He knows all my flaws (from petty mood swings, to not having my dreadlocks finely re-twisted, to silly clumsy-ness —  to waking up with noticeable skin blemishes). He was the first guy in a long time that I allowed to see me cry, but in the same light, accept me — for me.  We attended sporting events together, happy hours, hung out almost every weekend (or so it seemed), and on all the small holidays when I didn’t travel. Not to mention, music + hip-hop was our thing; something that connected us to each other.  His family was my family away from home. He was my homeboy. Unfortunately with true bonding, comes occasional fall-outs. We got mad, even angry with each other, but we mended and repaired for the sake of the friendship.

At some point during this bonding period, we couldn’t fake the many instances when we tried hiding the fact that we were attracted to each other.

So our dating experience begins.  It wasn’t over the top romantic or anything, and it didn’t need to be.  I felt like we were the only two people on Earth who truly got each other. So it was perfect. We were like BAM…

I was happy + extremely comfortable because we knew each other. Our 2+ years of friendship was our foundation and no one could separate us or say that we weren’t meant to be. At least that’s what I thought. And that’s what I felt. Until after a few months of romantically enjoying each other, everything went sour.

If you’ve ever been in a relationship, you know that at any given moment, time will take its toll. That could mean anything. At the end of the day, it depends on what you can tolerate. In my case, it was something I would not tolerate. I was done.

I left him AND the experience in question completely.  Both were totally out of the picture. Oddly enough,  my mom’s constant advice resonated in my mind. She always preached this quote to me:

“If you love someone, let them go.  If they return, they were always yours. If they don’t, they never were.”

Actress Kimberly Elise published it best on her blog,  (“If Your Love Is Meant To Be, He’ll Come Back Around. Here’s Why”)

But back to the story.  I’m moving on and not looking back. An entire year has passed without communicating. UNTIL…. 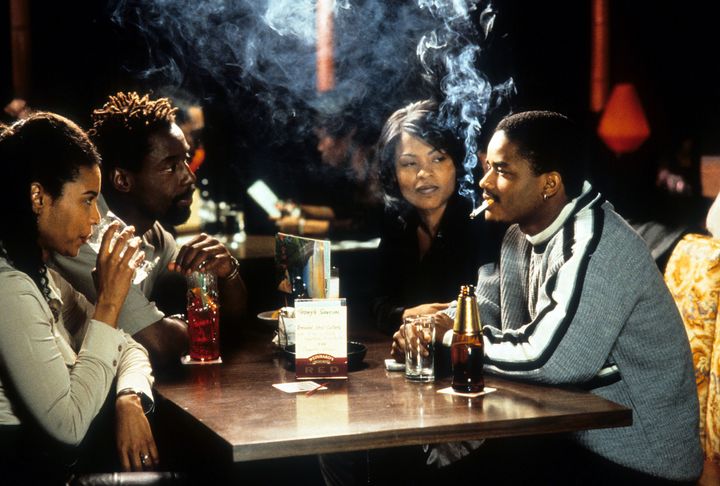 One breezy, end of summer evening. I make my way to a birthday outing with friends on top a rooftop with a cool pool a couple of feet away. I’d prepared a food dish, taken a shower and gotten dressed. I was looking forward to a safe night of fun and laughter. That did happen. It definitely happened… and while it was happening, my “ex” in question walks in. I had no clue he’d be there, and in no way I wanted him to be there. But after awhile,  we locked eyes. And once we locked eyes, it was a whole different story. He knew it. And I knew it.

You can’t control emotions. You can’t control the way you feel about a person. Big or small. Positive or negative — no matter how hard you try to convince yourself otherwise. Now. Going into that party… he was not on my mind. Not even one tiny bit.  As far as I’m concerned, I still wanted nothing to do with him. But once we locked eyes, it was apparent that we had unfinished business. Those “fond memories” returned with happy vengeance that warmed my entire body. No feeling, no emotion could tell me/us anything else. There was a storm of emotions flowing through me, both positive and negative.  With thunder. With lightning.  With butterflies fluttering.

At first glance, I wanted to pounce on him and show him how I really felt. And how I was feeling during the months of “letting go” without warning. I wanted to give him that experience that all females plot for the day they’d run into their ex. But something surprisingly happened. I didn’t do any of that.

I remained cool. Why so? Because he meant nothing to me in those moments? No, purely because it was natural. He was (is) a person that I knew… and that knew me. He knew by showing up to that party, that I wasn’t the type to flip out and make a scene. Nah. We both remained cool, although during it all, he was trying to gain my attention.

I finally gave in after a group shot of Hennessy [a drink he’d put me on a couple of years prior, for the first time in life]. After that, I asked him to come over to where I was so that we could chat. We chatted it up, briefing each other on our current lives. Him apologizing time + time again. By the end of the night, we were “catching up” over the phone. Yes, that happened — all in the same night.

So, WHEN Is Love Truly Worth a Second Chance? I didn’t know at that point. All I knew was that everything happens for a reason, and that our story wasn’t over.

For the women out there wondering this same question, I will pose the quote coined by our beloved Maya Angelou:

That could mean with the same person, or with a different person. It doesn’t matter. BE SMART, be courageous, and just give love one more try. Everyone deserves romantic happiness. And after learning how to love God + fall in love with yourself, first, you deserve it.

To this day, he and I are still learning each other + journeying together. We have our trials. We have our errors… but we enjoy each other’s company every single time we’re together. We dance. We laugh. Roast + play. Once we reconnected, it was almost as if we never missed a beat. We’ve learned to have fun, and date the right way (museum siting, UNO nights, dinner + movie nights, bar hopping, strolls in the city, cooking, or just a night of general conversation and laughter) and so that’s what we do. We check each other often. We know what makes each other sad/mad/a little upset/happy, etc. And the best part is, we also know how to fix it.  The major keys in our situation and with any relationship are:

I won’t lie, it’s HARD to trust someone again. It definitely has not been easy. I’ve wanted to give up all together, but he refuses to let me walk away.  He’s stuck with me after ALL the countless questioning.  I could go on-and-on, but in short, his genuine effort has been priceless.  He’s not perfect by any means, and neither am I. But I’m here. He’s here. We’re back and ready to figure out, why that breezy, end of summer evening, happened.